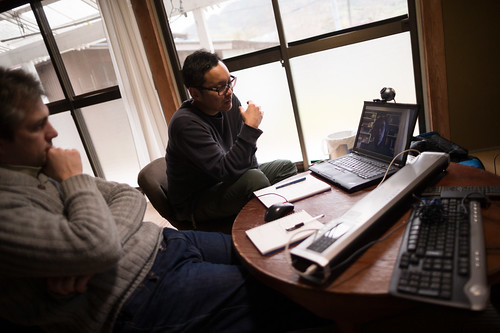 Akiba has a background in hardware engineering and electronics and originally started out as an IC designer working on communications ICs. He's been focusing on wireless and wireless sensor networks since 2004 and worked with the original 802.15.4-2003 specification as well as the original Zigbee specification in 2006. He wrote an open source Zigbee stack which ran into licensing issues due to the terms and conditions of the Zigbee Alliance documentation and has since abandonded Zigbee. He wrote his chibiArduino stack as a small, simple alternative to the heavier wireless protocol stacks available.

In 2008, he founded Tokyo Hackerspace with a group of friends and became deeply involved in the global hacker community. He's since helped start up Mothership Hackermoms, a hackerspace in Oakland, California specifically for creative parents and HackerFarm, a communal hackerspace in rural Japan focused on agricultural technology and sustainable living. He's currently working on another hackerspace in Dharamsala, India called Knowledge Garden which will be the sister space to HackerFarm and focus on education of Tibetan and local Himachal children, as well as work on providing infrastructure in the slums in the region.

Akiba's currently a research affiliate at MIT Media Lab in the Center for Civic Media and has a diverse background that spans stints as a UNESCO design consultant, lecturer for the International Atomic Energy Agency, and research positions at both Keio University and Osaka University in Japan.